We get asked about Lake Superior freezing over a lot at the outfitter, so we figured we’d take the time to answer that question here.

The short answer is yes, Lake Superior does freeze.

Even during milder winters like the one that we’re currently sweating through, you can expect to see ice in harbors and on some of the more sheltered sections of the Lake. The Grand Marais harbor has been freezing on and off all winter long (some brave souls were even out ice skating at one point), and for few days here and there folks have been able to get out and ice fish around the Duluth/Superior area.

That being said, ice on Superior is notoriously fickle and comes with its own set of risks regardless of how cold a winter it is. What may feel like an endless sheet of ice-skateable ice in one instance can float away in a matter of hours, leaving a dark blue expanse of open water between you and the shore.

Just ask the deer that made local news in early January after spending 18 hours stranded on an ice flow in the Grand Marais harbor (WTIP), or the 26 fishermen that had to be rescued by the coast guard just outside of Duluth in February.. 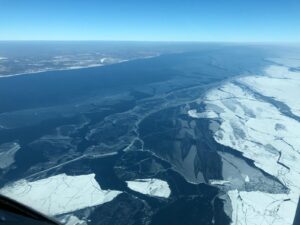 And then there are the ice flows that periodically blow in from elsewhere on the Lake. These sections of ice move around on Superior depending on conditions, following the wind from one shore to the next.

The photo on the right was taken of one of these ice flows a few weeks ago by our staff Eric’s father in law while he was out flying over the big Lake.

Can you tell where on the North Shore he was flying when he took the photo?

Ok, but does Lake Superior ever completely freeze over?

Again, the answer is yes, but rarely.

The last time that Lake Superior completely froze over was in 1996, but it has come close to freezing a few times over the past two decades. Since 1999, Lake Superior ice coverage has surpassed 90% at some point during five of the last 22 years, most recently in 2019 when we saw almost 95% of Lake Superior covered in ice at one time according to the national weather service.

According to the NOAA, the long-term average annual maximum ice coverage on Lake Superior is 61.5%, meaning that in a typical winter, the most ice coverage Lake Superior will see at one time is 61.5%. All of that is changing with climate change, however, as we’ve seen average temps along the shore creeping upwards with each passing year.

This winter, ice coverage on Lake Superior maxed out at 33% in mid February, right after the stretch of negative degree during the end of the bitter cold stretch of weather when ice covered 33% of Lake Superior. Given that it is 45F and sunny outside the outfitter right now with high temps predicted to be in the 40’s for the coming week, it seems likely that 33% ice coverage will be this year’s max… But you never know!