Hok Skis in the Boundary Waters

Over the last few days I had my first chance to try a pair of Hok skis, while camping and Lake Trout fishing in the Boundary Waters. During this trip, as with all winter trips, I was hauling a hot tent, camping gear and fishing equipment using sleds. For those unfamiliar with Hok skis they are a short and wide metal edged ski intended to be used in the backcountry. They have a built in skin which allows for easy climbing on hills and a slightly more controlled decent. Additionally they can be set up with universal bindings, which allow a traditional winter boot to be used while skiing. Universal bindings are critical in my opinion for a ski that is going to be used while camping, because keeping traditional ski boots dry and warm while not in use can be difficult. It also cuts down on one less item that needs to be packed in.

When I first began winter camping in the Boundary Waters I primarily traveled on snowshoes or my classic skis intended for groomed trails. A few years ago I switched to pair of backcountry skis with a universal binding and quickly realized that I would not likely be going back to traveling with snowshoes. I found that the skis were way faster and took much less effort to travel across lakes.  I do struggle more hauling sleds on steep portages while using skis. On hilly sections I often end up removing my skis and walking. I think this will still be the case at times with Hok Skis, but on more moderate hills the Hok skis provide enough grip and control to climb or descent even with a load.

My first thoughts on the Hok ski are really positive. I liked the amount of kick that I got with them and found that this helped in hauling the heavy load I had for a solo winter trip. This was especially true on small hills and while breaking trail across the lakes. Being a shorter ski and having metal edges I was also happy that the skis did not ever slip out from under me. While doing camp chores I found them to be easier than a traditional ski to use without poles. I had no issues pulling loads of firewood across the ice without poles.

This was also the first winter trip that I have brought my puppy along on.  We are both new to the idea of skijoring and I was pretty excited about how well it went. While skijoring in with her I liked having a shorter and wider ski to give me more stability and control. It was also nice for the times that she stopped in front of me or turned around to have less ski in front of me to get tangled in her line or run into her with.

The biggest down fall I saw in comparison to a longer and narrower ski was speed. This was more noticeable while skiing around the lake after camp was set than while traveling in because the heavy load I was pulling reduced my glide anyways. I was also concerned about slush issues with the skins on these skis. I applied some skin wax before the trip in preparation for slush, which has been pretty bad at times this year. I only encounter minor slush and had no real issues with the skis, but results may vary in extreme slush. Slush is always a pain no matter what you are traveling on, so how it compares with Hok skis vs. traditional skis or snowshoes will be something I’ll find out more about in the future but hopefully not too soon.

Although there will probably never be any ski or snowshoe that is perfect for everyone and all  winter conditions, I think the Hok ski offers a best of both worlds solution in many conditions. Stop in to check out our selection of Hok skis in the shop for both rental and retail. 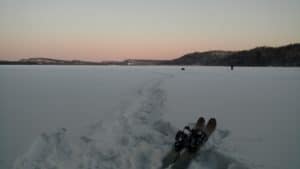